Late last week, I was planning to post about the most recent update to my pregnancy (baby is breech), but that feels a bit tone deaf with what’s going on right now. So while my personal “news” has been another unexpected twist and turn (literally and figuratively) in my pregnancy, compared to the strife faced by so many in the last week, it feels like such a small “problem.”

I’ll begin by saying that my heart is heavy for our country and our world. On one hand, it makes me wonder if we’re crazy for bringing yet another person into the world; on the other, I’m optimistic that we’ll raise a child who will be a beacon of light and one who will contribute to making the world a better place.

Though it doesn’t feel appropriate to bring comedy into this conversation, my current situation reminds me of a take away from comedian and writer Mike Birbiglia’s show, “The New One.” I was lucky enough to have scored tickets to the show’s opening night with a friend, on a whim, on Off Broadway about two years ago. A longtime fan, I was looking forward to his thoughts on parenthood and what he described as “reluctant fatherhood.” (An aside — “The New One” is available on Netflix, and Mike’s book, with contributions from his wife and poet J. Hope Stein, was recently released as well).

Though the show’s material was obviously written and performed prior to today’s context of having and raising a child in a global pandemic and mass protests, one of the main themes really resonates with me today.

Mike talked about different fears and worries about his journey to parenthood and bringing a child into a world of uncertainty. For him and that time, there were other issues — over pollution, what it means to be a “decent man” in the age of Me Too and climate change.

But his point was this — what we look at, see and hope for in our children and in their futures is the faith that they are a symbol of change and will do good in the world they come into. They are the next generation, and while the world is changing rapidly around them, they are full of possibility and potential.

May we all be so lucky to see the world through their eyes. 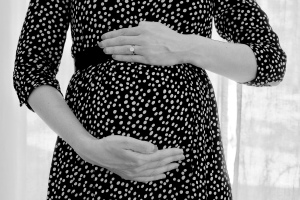 Hello! This is my corner of the internet, where, for the foreseeable future, I’m documenting my pregnancy in the midst of the global coronavirus pandemic.

I write from a tiny mountain town in Colorado, where I live with my husband and dog, and our baby-in-utero.